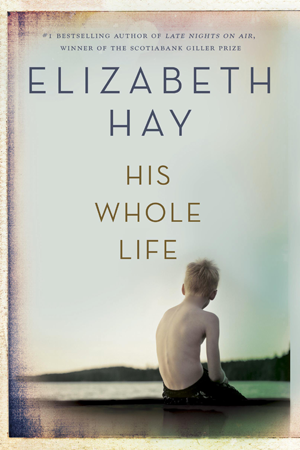 “This most wonderful of novels offers an unsentimental look at the sweetness and pain of boyhood against the backdrop of Quebec’s independence movement in the 1990s. Conflicts large and small – between city and country, French and English, wife and husband, mother and son – play out in Elizabeth Hay’s signature tender but incisive prose.”
— Annabel Lyon, author of The Golden Mean and Sweet Girl

Starting with something as simple as a boy who wants a dog, His Whole Life takes us into a rich and intimate world where everything that matters is at risk: family, nature, country, home.

At the outset, ten-year-old Jim and his Canadian mother and American father are on a car journey from New York City to a lake in eastern Ontario during the last hot days of August. What follows is an enveloping story that spans a few pivotal years of his youth and sets out competing claims on everyone’s love: for Canada over New York; for a mother over a father; a friend over a husband; one son over another. With her trademark honesty, vivid sense of place, and nuanced characters, Hay deftly charts the deepening bond between mother and son as a marriage falters and the family threatens to come apart.

Set in the mid-1990s, when Quebec was on the verge of leaving Canada, this is a coming-of-age story as only Elizabeth Hay could tell it. With grace and power she probes the mystery of how members of a family can hurt each other so deeply, and remember those hurts in such detail, yet find openings that shock them with love and forgiveness.

Isabel Costello from the Literary Sofa, one of the best fiction blogs in the UK, included His Whole Life in her roundup of the best Spring 2017 titles. Now she has gilded the lily by featuring the novel with a review, several photos, and a posting by me. For the full...

END_OF_DOCUMENT_TOKEN_TO_BE_REPLACED

A four N review by Susan G. Cole of His Whole Life in Toronto's NOW Magazine calls the novel "superb," "a poignant portrait of a complex family dealing with loss and regret." Well, to be accurate, she says, "nevertheless superb," because she takes exception to one of...

END_OF_DOCUMENT_TOKEN_TO_BE_REPLACED

Dory Cerny in Quill & Quire writes that "after eight books, a couple of Governor General's Literary Award nominations, and a Scotiabank Giller Prize (for 2007's Late Nights on Air) to her credit, readers have come to expect a certain level of excellence from Hay,...

END_OF_DOCUMENT_TOKEN_TO_BE_REPLACED

Nancy Wigston in the Toronto Star writes: "In His Whole Life, Elizabeth Hay returns to the theme of duality, that tug between north and south that haunts her fiction. How lucky we are to have her, this writer who stares down the tough issues in life -- whether...

END_OF_DOCUMENT_TOKEN_TO_BE_REPLACED

In Macleans magazine Dilia Narduzzi reviews His Whole Life: "Hay writes an expansive novel about the meaning of loyalty, friendship, and choosing between staying and going. While there's plenty to sink your teeth into -- the intense relationships between humans and...

END_OF_DOCUMENT_TOKEN_TO_BE_REPLACED

In Tracy Sherlock's review of His Whole Life in the Vancouver Sun, she says, "This book is about growing up and the events that make growing up harder. It's about friends and secrets and broken marriages. It's about doing what one has to do to get by and to look...

Posts About His Whole Life