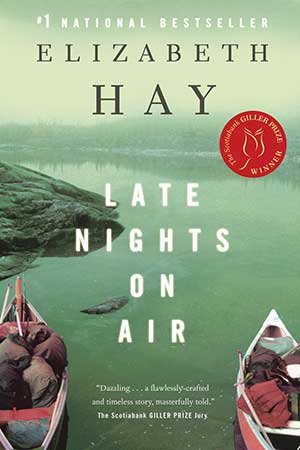 Winner of the 2007 Scotiabank Giller Prize

2008 Libris Award for Fiction Book of the Year

Notable Book of the Year, Globe and Mail, Quill & Quire

Harry Boyd, a world-weary, washed-up television broadcaster, has returned to a small radio station in the remote reaches of the Canadian North. There, in the golden summer of 1975, he falls in love with a voice on air, though the real Dido Paris is even more than he imagined.

Dido and Harry are part of the cast of eccentric and fascinating characters, all transplants from elsewhere, who form an unlikely group at the station. Their loves and longings, their rivalries and entanglements, the stories of their pasts and what brought each of them to the North, are at the heart of the novel.

Then one summer, four of them embark upon a long canoe trip into the Barrens, a mysterious landscape of lingering ice and almost continuous light. In that wild and dynamic arctic setting (following in the steps of the legendary Englishman John Hornby, who starved to death in the Barrens in 1927), they find the balance of love shifting, much as the balance of power in the North is being changed by a proposed gas pipeline that threatens to displace Native people from their land.

The Bookbag review of Late Nights on Air

It was the beginning of June, the start of the long, golden summer of 1975 when northern light held that little radio station in the large palm of its hand. This isn't quite the opening sentence of Late Nights on Air but it does make the first page. For those of us...

END_OF_DOCUMENT_TOKEN_TO_BE_REPLACED

The Ottawa Citizen review of Late Nights on Air

Think of Elizabeth Hay as a gentle murderer. She knocks off a goodly number of main characters in her new novel, Late Nights on Air. But, in most cases, they have the decency to die off-camera, mysteriously and bloodlessly, despite unsettling hints of murder and abuse. The one death presented to us most vividly is a drowning, an event more sad and poetic than terrifying.

END_OF_DOCUMENT_TOKEN_TO_BE_REPLACED

The Georgia Straight review of Late Nights on Air

Much of Elizabeth Hay’s third novel takes place in Yellowknife or on the tundra beyond; harsh terrain and the chill of death are often present. Yet this is one warm story, thanks to characters so vital it’s as if they’re talking to us over java at the Strange Range café.

END_OF_DOCUMENT_TOKEN_TO_BE_REPLACED

The Washington Post review of Late Nights on Air

n the good old days, before we had to worry about the Internet killing off everything, we used to worry about the survival of radio. First television drove the industry into the music corner, and then corporate consolidation, rightwing cranks and shock jocks homogenized the dial to death. Let a thousand podcasts bloom, but they can’t replace the special intimacy we used to feel late at night in the car or at home—lonely or missing someone—listening to the silky voice of a sympathetic deejay holed up in a studio, talking into the dark.

END_OF_DOCUMENT_TOKEN_TO_BE_REPLACED

The Spectator review of Late Nights on Air

Late Nights on Air comes daubed with the usual eulogies, yet this is one book that truly merits the ecstatic blurb and more besides. It is Elizabeth Hay’s third novel, after A Student of Weather (2000) and Garbo Laughs (2003), both of which have been lauded in her native Canada and, to a lesser degree, beyond. Late Nights on Air is set largely in the mid-Seventies, in Yellowknife, the main town of Canada’s Northwest Territories. Harry Boyd, edging into his forties, has failed elsewhere, and has come to lick his wounds at the local radio station where his career began. He is joined there by a motley band of fugitives: honey-voiced Dido who fell in love with her father-in-law further south; clumsy ingénue Gwen, in retreat from an uninspiring home town; as well as some monosyllabic, disdainful veterans.

Posts about Late Nights On Air